If you read my last post, you know I was on a quest to rip some CDs but was delayed by some hardware problems. Now that those are resolved, I thought I would document the process I used to actually rip the music, using my Gentoo desktop.

I had never ripped CDs using Linux (Who still uses CDs anyway?) so I started searching for an easy to use open source ripper. I have both gtk and kde libraries installed on my system, so it doesn't really matter what desktop the app is built for. One of the most popular Linux applications is Grip. I installed it on my system using "emerge -av grip" I did a test run with it but the interface wasn't very intuitive and I'm very impatient. (Who has time to RTFM?!) 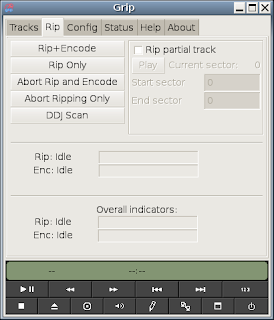 Grip GUI
It seemed easy enough to use with the default settings, but one of my requirements is to rip the tracks using the lossless FLAC audio codec, and I couldn't easily figure out how to do that with Grip.

With Grip out, due to impatience, I kept searching and found K3B. I have used K3B in the past for burning CDs and DVDs but I was unaware that it ripped CDs. I installed K3B using "emerge -av k3b". The install took a while because there were quite a few dependencies my system needed to compile and install. When the installation was complete, I fired it up, and after the fancy splash screen disappeared, I easily found the ripping section of the program using the "More Actions" button on the main screen. I popped in the first CD, a Beethoven compilation, and was delighted to see that it automatically recognized it and downloaded the album and track info from CDDB. 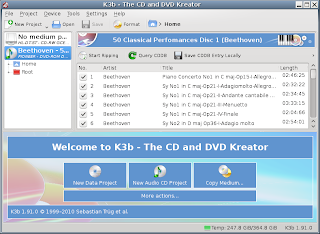 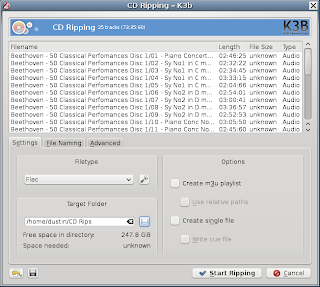 Selected the "Flac" filetype and custom target folder
Once I had the above settings configured, I hit "Start Ripping" and BAM! Music encoded with FLAC after a few minutes. Using the badass program Amarok (covered in next post) I was able to listen to the ripped music.
Posted by Dustin