So I've been using my computer quite a while now without any type of CD drive attached, and had no need for one until recently. I have been using Gentoo Linux exclusively for about 3 months, but have had it installed for about 6. one of the main reasons for the move to Gentoo was my Windows 7 RC install was getting close to expiring (MS changed the dates... lame). One of the cool things about Gentoo is that all software is compiled for the local system, rather than using binaries, which can give speed increases and also allows for not installing components that are not needed. Portage makes adding software a simple task using the emerge command. If software isn't available through portage or elsewhere on the internet, a USB flash drive easily takes the place of optical media..

Anyway, Amanda and I have been trying to decide on what music we want playing at our wedding so I figured it would make things easier if we ripped the CDs we liked to the computer for easy listening. Good idea in theory, right?
I had an old DVD drive that has been collecting dust for who knows how long, so I figured I would hook it up and I would be ripping CDs in no time. The installation went smoothly… Attach the IDE ribbon cable and set the jumper to master. Pretty simple stuff. Unfortunately, the process was about to turn sour.
After closing the case back up, I hit the power button and was greeted with silence. Hearing nothing after pressing the power button is probably one of the most dreaded problems a computer technician faces. No beep codes, no fans whirring, just nothing. I quickly opened the case back up and unplugged the DVD drive and hit the power button again. Nothing. By this point I was starting to feel a bit anxious. I removed everything from the motherboard except for the processor and tried again. Nothing. Arrgh, what the heck happened?!?

At this point the problem can really be only a few things: The battery on the motherboard had died, the motherboard itself had died, the power button had broke, or the power supply had died. I wanted to check out the power button first, because it tends to be a little sticky and sometimes requires a little finessing. I removed the front cover and clipped the green and white wires leading to the power button. I stripped a little bit of insulation off, exposing the wires and then shorted them. Nothing. Well, that rules out the power switch being broken. By this time we had to run some errands in town, so I figured I would take the BIOS battery with me and get a replacement. I stopped by radio shack and found a replacement for about $5. I wasn't very optimistic that the battery was the problem. It was a long shot at best, but it's a heck of a lot cheaper than a new power supply or motherboard.
When we got back home I changed out the battery and attempted to power on the computer and was greeted with… nothing. That ruled out the cheap fix. Now it was either the motherboard itself or the power supply. A new replacement cost for those might as well be $1,000,000 as we are saving for the wedding and every dollar is closely accounted for. Feeling a little desperate, I sent out some pleas on Facebook and on my work email, begging for spare parts.

While waiting for responses to my distress call, I remembered I had an old Antec 450 truepower powersupply in the closet. Great! I hooked it up to the motherboard, feeling a bit nervous about the much larger main power connector on the motherboard that left some open leads. Once hooked up, I pressed the power button and… success!! Well, sort of. The fans went on and the computer posted, but there was no video. Unfortunately, the old power supply did not have a PCIe power connector, meaning the video card was not fully powered up. At least I knew it was a problem with the power supply and not the mother board…
I did a quick google search and found that adapters to hook up the PCIe video card to my old power supply did exist, but none of the local shops had them, meaning I would have to wait for a cable to be shipped. That seemed unacceptable, so I did some research on the power connector and found out there is nothing special about power input; it's just 12 volts with ground wires, the same as the rest of the components. It just uses a different connector.

When I saw that it uses standard 12v, I figured I could make my own adapter using the cable from the broken power supply, and a Y adapter cable I had. Here's what I started with: 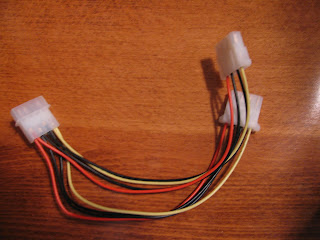 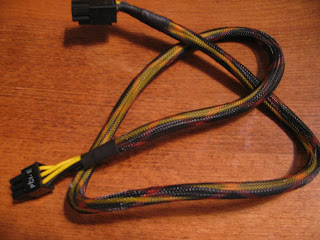 PCIe cable
Next, I cut off the rubber coating to see how the wires were arranged. 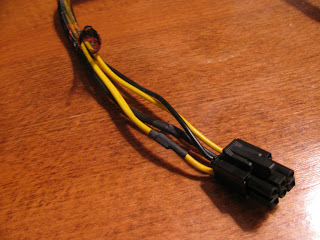 You can see that two wires are just spliced together.
Next, I cut off the end farthest from the connector that plugs into the PCIe card, and also cut off the red wires on the Y adapter. I made sure to tape up the cut wires to avoid shorts. 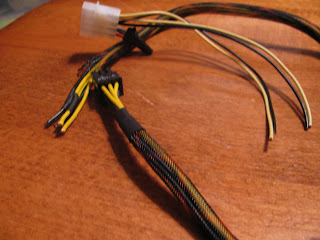 Cut wires
Next, I stripped the insulation off all the wires and spliced them together, yellow to yellow and black to black. 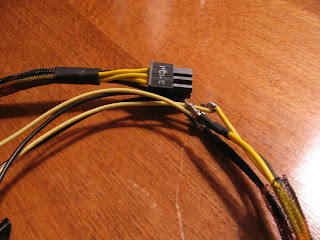 I then taped up the wires individually to avoid shorts, and finally covered up all of them to tidy things up. 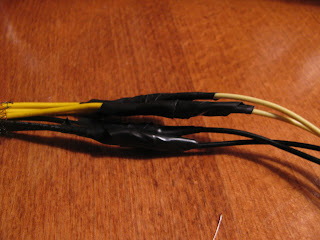 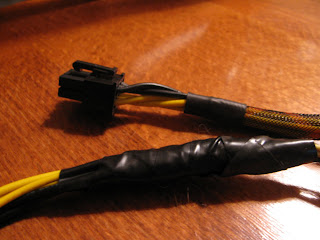 Final product.
I excitedly hooked the new (old) power supply and attached my custom cable to it and the video card. Holding my breath, I pressed the power button, praying the whole thing wouldn't blow up. After pressing the button, I heard the computer power up, and the monitor lit up and displayed the boot sequence. 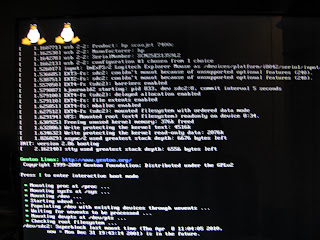 Yay!
The startup sequence hung because the BIOS time was reset, causing the hard drive to have write times in the future. Once the clock was updated, the computer booted normally. Thus ends the saga of the busted power supply!
Posted by Dustin